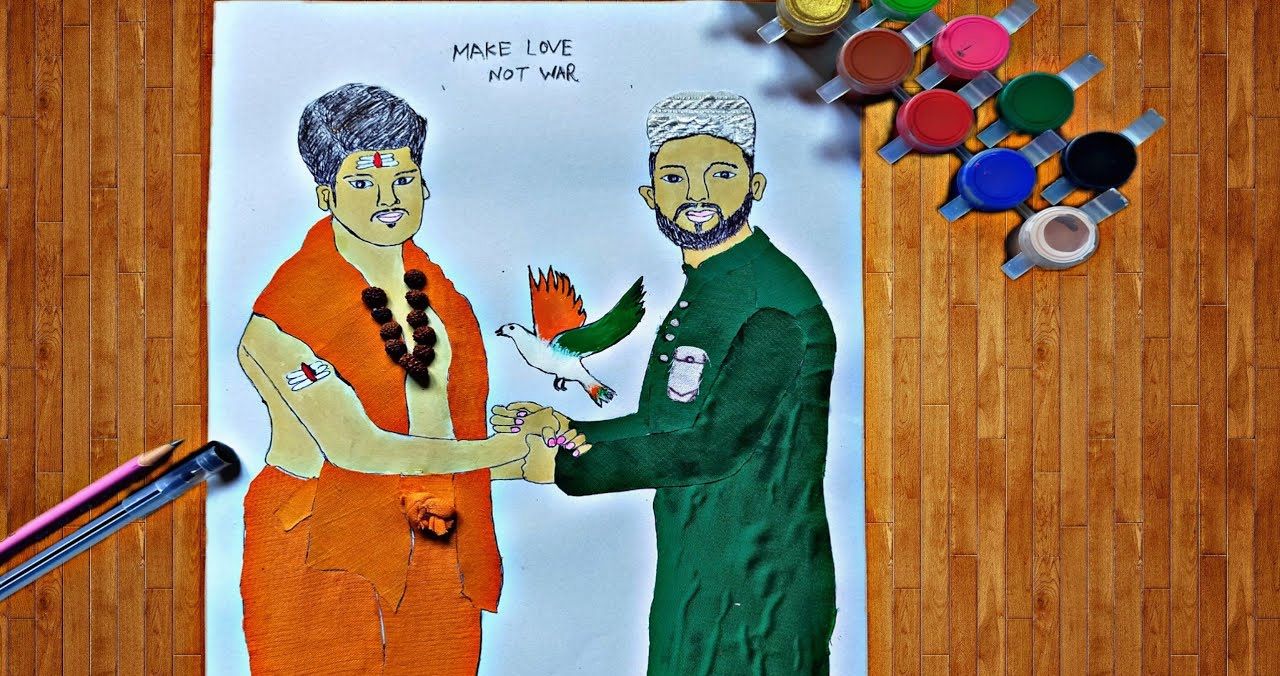 Even though the social behavior, mutual love and relations between Hindus and Muslims continue to develop positively, it seems pleasant. Even the Aryan races of Hindus are not pure residents of Hindustan; they arrived from other countries and settled victoriously in Hindustan. Immeasurable time has passed since their settlement in Hindustan, hence they are the nationals of Hindustan and are called the Hindu residents of Hindustan. No less time has passed since the arrival of the Muslims, countless generations of whom have passed on the surface of Hindustan. Many Muslims have common Aryan ancestry and many others are pure Aryan. Centuries have passed, and we have lived on the same land, eating the products of the same land, drinking the water of the same land or of the same river, and living breathing the air of the same country. Therefore, there is no difference between Muslims and Hindus. As people of Aryan race are called Hindus, Muslims are also called Hindus (the people of Hindustan). We expressed that Hindustan is a beautiful bride, and Hindus and Muslims are her two eyes. Its beauty lies in keeping both of its eyes healthy and balanced. If any of them become unbalanced, the beautiful bride will have squint eyes, and if one eye continues to suffer, it will eventually turn into a one-eyed entity. The social status of both is almost the same. Indeed, many Hindu habits and customs are widespread among Muslims. Thus, the more the affection, the sincerity, the mutual aid and the brotherhood (because there is no doubt about the fact of being national brothers) between the two races will increase, the more we will be proportionally happy in the same measure.
Three proofs of affection and sincerity have been publicly provided in the present day. First of all, we heard that in Barayli, Hindus and Muslims proved themselves beautifully to each other. On the day of Bakr Eid, Muslims did not offer the sacrifice of a cow. The Muslims offered the sacrifice of goats and sheep instead of cows. Additionally, Hindus agreed to participate in mourning and establish water stalls in Moharram times. We, too, have long held the same opinion that if by refraining from sacrificing a cow, mutual friendship and love remain intact, then not offering a cow is a thousand times better than sacrificing a cow. Thirdly, we have to build a mosque in the civil division of Manakpurjung, Daka district, and raise funds for this mosque. The Hindus and the Muslims jointly formed a committee for this purpose, and together they collected money for the mosque.
The Muslims of this place are poorer. Therefore, for the construction of mosques, Hindus strive more than Muslims. We salute both races for this kind of mutual affection, helpfulness and brotherhood which the Hindus have shown. The difference in religion between Hindus and Muslims cannot become an obstacle to social conduct, mutual love and sincerity. Likewise, difference in political affairs cannot become an obstacle to social behavior, mutual love and sincerity, and mutual help.
Hindus and Muslims are subjects of the English government and live happily, peacefully and freely under their shade and shade. However, there is no doubt that we have different opinions on the political affairs of the two races. Hindus are supporters of the political policy of the Congress, which belongs to its elite members or supporters. And every year, the policy is announced and highlighted in different places on behalf of Congress. Muslims are opposed to politics. People slander them, saying they flatter the government. However, this claim is incorrect. According to Muslims, the administration and peace of the country can be disrupted by this policy. This policy is in no way suited to the situation in Hindustan. If the goal of unity and solidarity is for Muslims to join Congress and its policies, in my view, that is an unattainable goal. This will greatly disturb the administration and the peace of the country. Some Muslims, incoherent, ignorant of administrative matters and believing in impossible goals, support Hindu politics and Congress meetings. Muslims, on the other hand, are generally barred from participation. We don’t care that Hindus and Muslims have different religions. We want friendship, love, harmony and helpfulness.
Likewise, despite the political differences of opinion in social affairs, we want a behavior of mutual friendship, love, mutual aid and brotherhood. And we believe that in the present period, the way Hindus have extraordinarily expressed their brotherhood and usefulness to Muslims is not a cheat to include Muslims in Congress, but real brotherhood, real usefulness and real countryman’s reason. We pray to Allah that this is so and that both races may live their lives under the English government with extreme fidelity. And we also pray for the safety of the Respected Queen Victoria, Caesar of India, and the longevity of her kingdom. The unprecedented procession of the sixty years of his kingdom will soon be celebrated.
[from Anwar Sidiqi’s Intikhab Mazameen Sir Syed (pp120-23)]

The translator is a lecturer in economics.
[email protected]