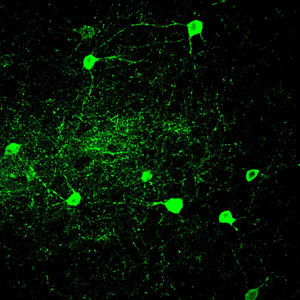 Psychotic symptoms are a hallmark clinical manifestation of schizophrenia. They are accompanied by an increase in oxidative stress, which results in damage to a particular type of neuron, parvalbumin neurons. This deterioration causes dysfunction in the activity of the prefrontal cortex, a region of the brain involved in cognition. A study conducted at the Center for Psychiatric Neurosciences of the University of Lausanne (UNIL) and at the University Hospital of Lausanne (CHUV), and supported by the National Center for Research Skills Synapsy (Synapsy), showed, in an animal model , that the cellular recycling mechanism of mitochondria is deficient in parvalbumin neurons. The study – published in the journal Molecular Psychiatry – studied the underlying biochemical mechanisms, identifying two key molecules, miR-137 and COX6A2, which can be detected in the blood. When used as biomarkers in patients diagnosed with psychosis, they identify two distinct clinical subgroups with different severity of symptoms, cognitive deficits, and day-to-day functioning. This discovery represents a major advance in the stratification of individuals suffering from schizophrenia, whose heterogeneity of symptoms currently limits diagnosis and treatment.

Schizophrenia is a psychiatric disorder whose clinical manifestations are extremely heterogeneous, which makes diagnosis difficult, and suggests that several neurobiological mechanisms are involved. Patient stratification, based on reliable biomarkers, would make it possible to better target the available treatment options. For this, the group of Kim Do, researcher at the UNIL / CHUV Center for Psychiatric Neuroscience, in collaboration with Philippe Conus, director of the General Psychiatry Service of the CHUV, carried out a translational study in patients and an experimental model, relating to the mitochondria. parvalbumin neurons.

The central role of oxidative stress

Mitochondria are organelles responsible for producing the energy cells need to function normally. They do this by using oxygen, releasing highly toxic molecules called “free radicals.” They must be eliminated to avoid irreparable damage from oxidation, that is to say from oxidative stress. The antioxidant system takes care of this task. The brain, a major producer of free radicals, is very sensitive to deregulation of the antioxidant system. “We know that an essential antioxidant produced by the human body called glutathione is deficient in patients with schizophrenia,” explains Kim Do. “This deficiency and the resulting imbalance between free radicals and antioxidants (called redox deregulation) lead, among other consequences, to an alteration of parvalbumin neurons, a type of neuron which is directly involved in all cognitive functions.”

To conduct their studies, Professor Do’s group is working with an animal model of schizophrenia, in which the level of cerebral glutathione is lowered. “This animal model is not designed to mimic a human disease in all its complexity, but to reproduce a typical anomaly and study its consequences.”

Using this animal model, it was possible to observe that altered mitochondria accumulate in parvalbumin neurons in the prefrontal cortex. “Normally, they are eliminated or recycled, so that the” cleaning system “is no longer functional”, adds Inès Khadimallah, researcher in the laboratory of Professor Do and first author of the article published in Molecular Psychiatry.

Mitochondria are usually able to remove their damaged parts as they separate, using a mechanism called mitophagy. This process involves a series of molecules whose production is controlled by miR137, a microRNA that plays a key role in their regulation. Inès Khadimallah, in collaboration with her colleagues, succeeded in demonstrating that the level of miR-137 was very high in the model, as was oxidative stress. In parallel, an element of cellular respiration expressed specifically by parvalbumin neurons, the COX6A2 molecule is reduced. “In other words, the mitochondria of parvalbumin neurons are dysfunctional as a result of increased oxidative stress, and this can be demonstrated by analyzing the levels of miR-137 and COX6A2 in the blood.”

On the way to an innovative treatment?

In their attempts to intervene directly on the free radicals produced by the mitochondria, neuroscientists have shown, in the animal model, that the alterations of these two molecules, miR137 and COX6A2, can be completely corrected by an antioxidant compound specifically targeting the mitochondria , called MitoQ. . The research team was able to demonstrate that treatment with MitoQ also increases the survival and functionality of parvalbumin neurons in the prefrontal cortex. “In view of these promising results, the same compound will be tested in humans as a complementary treatment in the early phase of the disease. This is an important step forward! said Inès Khadimallah with a smile.

Towards individualized care thanks to patient stratification

By analyzing the blood of patients diagnosed with psychosis, Do’s group was able to determine the levels of miR137 and COX6A2 in the brain. By using these two molecules as biomarkers, they succeeded in demonstrating that among the great heterogeneity of schizophrenic patients, there are two major and distinct groups, those with and those without mitochondrial deficiency. In addition, mitochondrial abnormalities are associated with cognitive impairment and the corresponding clinical symptoms: loss of autonomy and reduced social skills. “Patients suffering from a mitochondrial deficiency present more severe clinical symptoms than others”, explains Inès Khadimallah.

The study thus revealed two biomarkers which would make it possible to precisely select the patients likely to benefit from a treatment targeting the deregulation of cerebral mitochondria. “Our work paves the way for an accurate diagnosis and early, individualized management of people at high clinical risk,” concludes Kim Do.

Warning: AAAS and EurekAlert! are not responsible for the accuracy of any press releases posted on EurekAlert! by contributing institutions or for the use of any information via the EurekAlert system.