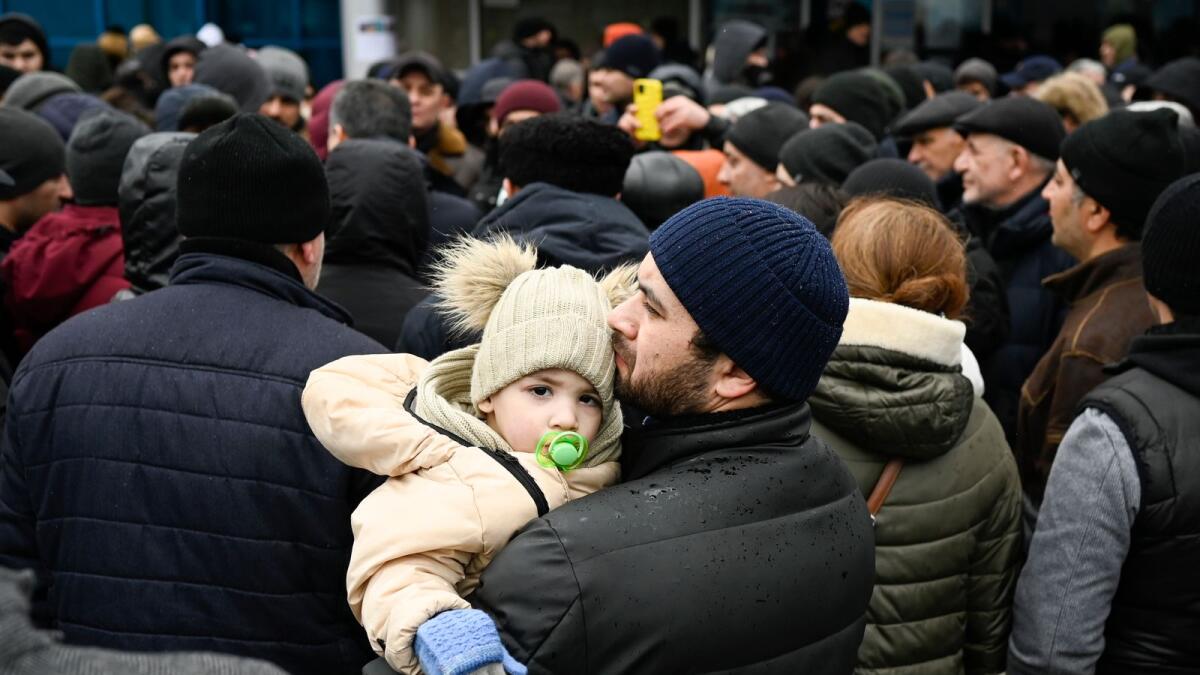 The psychological scar of conflict – News

The victors of war write history. But do ordinary people carry the ghost of the conflicts their countries have fought? Does it make them socially awkward when they encounter “the other”? Is it because of too much access to information and connectivity?

A brief encounter rarely sums up the brutality of war. However, it can open scars uncertainly.

Immediately after the US invasion of Iraq, while the wounds of war were still fresh, an American journalist walked into his newsroom in Dubai. He had spent months embedded with the US Army in Iraq, representing a top magazine. These were the most turbulent days of a violent reaction against the invasion.

“The former American journalist who covered the Middle East”, as he chooses to call himself, was proud of his unbiased journalism and considered himself lucky to have survived this phase of violence in Iraq. However, that morning, as he was settling down to file his report, he was introduced to a young Iraqi girl who had just joined the organization.

It ended up being an awkward encounter for him. Ironically, he almost entirely forgot the episode. It felt like the trauma of being so close to carnage or the guilt of representing the abuser’s country. Nevertheless, he has a telling remark about his encounters with ordinary Iraqis.

“Not all Iraqis hated the American invasion. Even some who did would be unfailingly polite. Others less,” he says. A conflict influencing social behavior, especially against those who perpetrated it, deserves a larger scale than a single encounter. For the American journalist recounting these circumstances, “these were really individuals dealing with their experiences and traumas that could affect the way they interact with someone who comes from a country that could have attacked them” .

That said, there is a huge difference between being a journalist and an active fighter. “Most Iraqis I met understood this difference,” he said with a sigh of relief.

Data analyst and migration expert Emina Osmandžiković is a Bosnian Muslim. She is proud to belong to a community often referred to as “Bosniak”, one of three officially recognized ethnic groups in Bosnia and Herzegovina, the other two being Orthodox Serbs and Roman Catholic Croats. Born during the Bosnian War at the height of the siege of its capital – one of the longest sieges of any city in modern history – Osmandžiković’s family members fled the country as refugees.

“Today they live scattered all over the world, having continued their lives in the safety of other countries,” says Osmandžiković. Her parents chose to stay and raise her and her younger sister in a forward-looking yet war-scarred country that has struggled to stand on its own since the 1990s. She was raised to be blind to differences.

Osmandžiković’s parents traveled in the Balkans and ensured that the sisters interacted with all communities in the region, regardless of their ethnic, religious and other differences. For her, there is no “other side” as such. However, her easily recognizable Muslim name, especially in the Balkans, got her into some sticky situations.

She recalls attending a conference in Athens, Greece a few years ago when an unpleasant sequence of events unfolded. “Right after my lecture on non-European refugees and their integration into the European Union (EU), I went to a local cafe to buy coffee,” she says.

The owner of the cafe was a sturdy, tall person with a forest of tattoos covering both his arms, most of them depicting the Orthodox cross and similar symbols of Christianity.

“When I ordered my coffee, he asked me where I was from. I replied that I was from Bosnia and Herzegovina and made a joke that we were almost neighbors (one of those ‘our spinach pie is better than your situations’ jokes),’ Osmandžiković recalled. However, the moment she answered, he looked at her intently, more intently, and asked her name.

“Somehow I knew I was supposed to lie. I said Emina, a neutral name with an ambiguous ethno-religious affiliation,” she recounts, adding that the tattooed giant almost sighed a half-gallon of air in relief and laughed, “as if he was considering long lost times. This was a classic example of the bogeyman of conflict triggering socially awkward behavior.

But it didn’t end there as Osmandžiković’s curiosity got the better of her. When she asked for his name, which turned out to be a typical Greek name, she couldn’t remember. “He then looked at me and said: Thank God you are our Orthodox sister. You come from the right side of Bosnia, from our side. I was there during the war and I support our Orthodox brothers. Your coffee is free, sister. It was by far the most bitter coffee she had ever had.

For Keti Archaia, a 25-year-old Georgian, the raging conflict between Russia and Ukraine has rekindled the dilemma over sharing space with people perceived as aggressors. “It’s hard to talk with the wounds still fresh as the situation in Ukraine evolves. But I think the problem is not so much in nationality as in the absence of shared values ​​and a political point of view,” she says.

Interestingly, Achaia encountered differences of opinion among the three nationalities (Russians, Georgians and Ukrainians). For her, they are all equally problematic. “With recent developments, it has come to a point where these different points of view can no longer coexist without the bitterness of the conflict,” she says, stressing that the points of view should not be confused with nationality.

Archaia still has faith in humanity and hopes that we will remain civilized enough not to hold ordinary citizens accountable for the actions of their rulers. “But I also believe that no action is always an action. Citizens must expose their leaders and hold them accountable in the first place,” she says. According to her, this is where the real conversation needs to take place.

In the interconnected world we live in, it is impossible to avoid meeting people from “the other side”. Are access to information and connectivity making us more socially awkward? “Not at all,” said Archaia. “In fact, connectivity helps us to exchange information and find the courage to speak up.” She cites the example of the Soviet Union where “the lack of connectivity and information made people paranoid”. “I hope no one wants to go back on this,” adds Archaia.

Kyiv-based psychoanalyst, clinician and author Yana Korobko generalizes war as not being against a nation. “This (Russia-Ukraine) war is against political ideas and regimes. There are a lot of Russians who don’t support Putin,” she said. This almost automatically means that not all Russians can be held responsible; nor can the Ukrainians be absolved of all guilt.

According to Korobko, the encounter with radical otherness is always disturbing, not to mention the wide access to the other side of the aisle today. “Such meetings happen spontaneously and are often unsolicited,” she says of the social gatherings that often turn awkward. Often, the gaps that existed are forgotten.

Born and raised in Los Angeles by Mexican parents, Yesenia Serna grew up with a deep understanding of Mexican culture and traditions. Now she lives in Italy and tries to hold on to what that means, especially while cooking. Serna shares Mexican recipes on her YesiCooks Instagram page.

Serna feels too American to understand the bitterness surrounding the wall with Mexico. However, she is sensitive enough to understand that stereotypes during social engagements will continue to influence us unless we learn from history. “An ordinary person’s beliefs may be the same as their ancestors who committed the crimes, and you’ll find out with a conversation that goes deeper than the surface,” she says.

Serna doesn’t use the word “awkward” to describe such encounters. “I think we are ‘reactive’ because having access to this information has made us more aware of politics, privilege, microaggressions, etc.” she says. “We are able to react to certain situations and in many cases we defend either ourselves, or our people, or the disadvantaged,” says Serna. According to Serna’s hypothesis, it is the environment and the social setting that define our response to stimuli of this type. However, heredity counts as much as the environment when it comes to human commitment to a social category.

More than two decades after the conflict, the “Bosnian” Osmandžiković still finds deep-rooted divisions, even throughout the region, and not just in the immediate vicinity of Bosnia. “I am a Slav, perhaps more than the owner of a Greek cafe. But what matters is what lives in people’s heads rather than the truth,” she says.

Without a doubt, no sane person would hold an ordinary citizen responsible for a war crime committed by his country. But with growing examples of hyper-nationalism, is that a thing of the past? For Osmandžiković, perhaps it depends on the type of conflict.

“In a highly polarized world, such narratives flirt dangerously with extremist tendencies. And looking at the scale of these societal problems, you end up with entire communities that are politically sharp, hypersensitive to “out-of-group” individuals, and staunch fighters of any opposing narrative, be it official positions or alternatives by others/minority groups,” she says.

Perhaps access to information and connectivity makes us more socially awkward than just a few decades ago. Moreover, social media is a powerful tool that we can use to endlessly connect with people around the world. We can also use it to isolate ourselves in our cognitive bubbles with only like-minded people, avoiding others.

According to Osmandžiković, we now have virtually unsolvable access to a cornucopia of information. However, not everything we read online (or offline) is accurate. “Most things cannot be classified as apolitical. And in the information age, we often lack the critical thinking skills to turn it into knowledge about things,” she says, adding that this applies both at the individual and societal level “with entire countries included in this ‘mind numbing’ exercise.

Following Osmandžiković’s argument, this all leads to mass desensitization. “I believe Hannah Arendt called it the banality of evil, put in the context of mass atrocities and war scenarios,” she says, not sure how we can escape it unless we keep looking for ways to develop our critical thinking skills.

“There is much more out there that can connect us rather than divide us, and the trick is to find those meeting points. Otherwise the world could become more fragmented than ever, swimming in the sea of ​​information that we we can’t or don’t want to deal with,” she concludes.

Ehtesham Shahid is an editor at the Emirates Policy Center

After victory, burden of proof now on AAP: The Tribune India