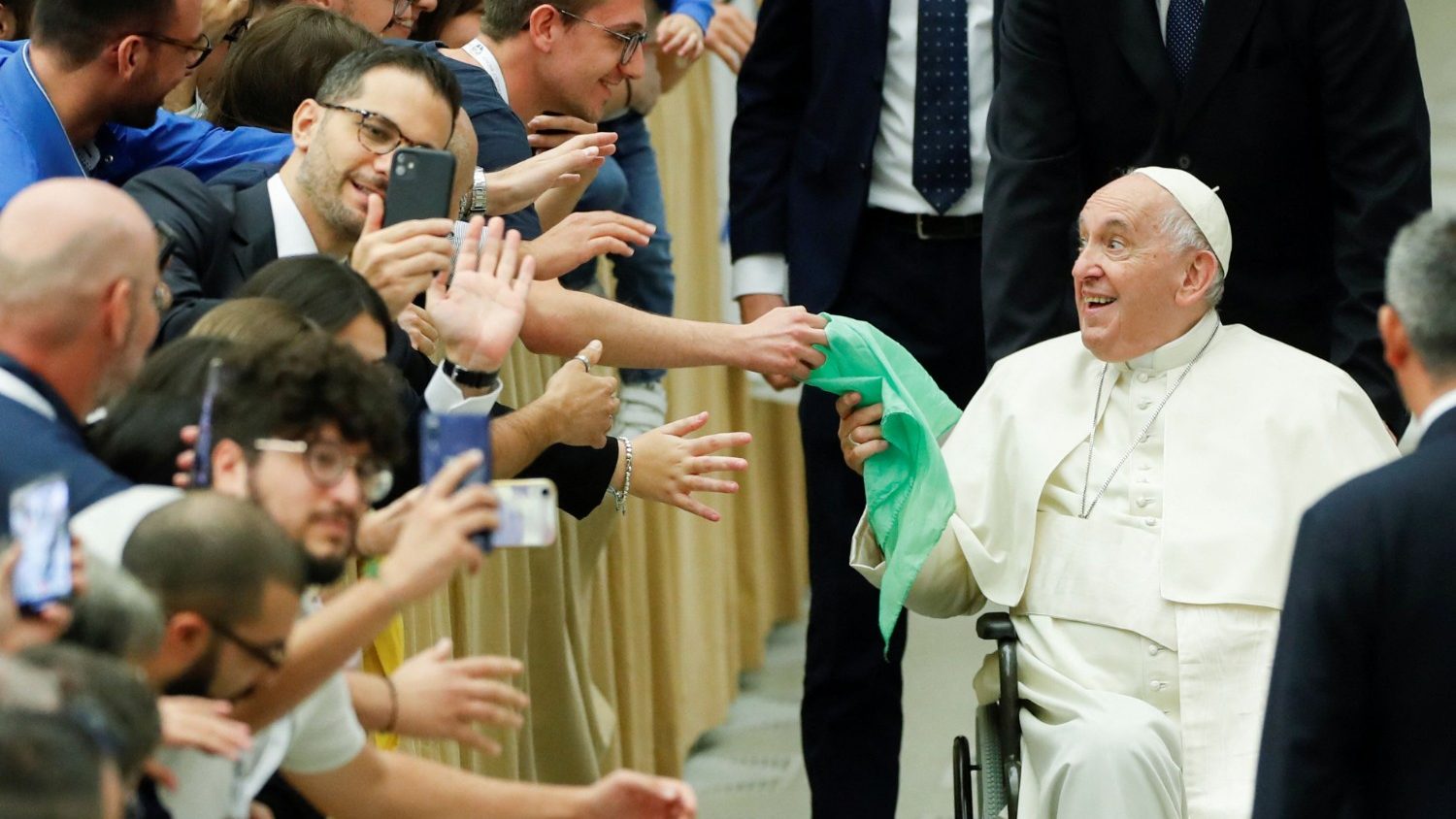 Pope Francis encourages the young leaders of Italian Catholic Action in their work in the parishes and urges them to contribute to the growth of the Church in fraternity.

Addressing them, the Pope expressed his gratitude for their care of the parishes, noting that, as he belongs to a different generation when the parish and the parish priest, was a central point of reference in people’s lives through the masses. Sundays, catechesis and the sacraments. .

He further recognized that the socio-cultural reality has now changed considerably – in other countries and in Italy – and that the mission of the Church, including the parish, has been rethought. However, one essential thing remains for everyone in their journey of faith and growth: “the parish experience has been and is important”.

The pope said that the parish “is the ‘normal’ environment where we have learned to hear the Gospel, to know the Lord Jesus, to offer free service, to pray in community, to share projects and initiatives, to feel part of God people.”

Thanks to Catholic Action, Pope Francis emphasized, parish leaders have had an “associative” experience linked to that of the parish community. Many, he added, have been part of Catholic Youth Action and are learning what it means to be part of a Christian community.

“It is very important: to learn by experience that in the Church we are all brothers and sisters through Baptism; that we are all protagonists and responsible; that we have different gifts and all for the good of the community; that life is a vocation, following Jesus; that faith is a gift to be given, to witness.

The Pope also affirmed the Christian’s responsibility to take an interest in social reality and to contribute, moving from indifference to attention, in the face of human misery which is almost always the result of injustices in eradicate. He said these realities of life are often learned in the parish and in Catholic Action and that many, both in the Church and in society, have carried into adulthood these things they have learned in as young people.

“So, dear young people, the Pope said, we are of different generations, but we have in common the love of the Church and the passion for the parish, which is the Church in the midst of homes, among people .”

Contribute to the growth of the Church in brotherhood

The Holy Father then recommended ways in which Catholic Action can contribute to the growth of the Church in fraternity.

First, he urged them not to be frightened even in the face of a weak community “dimension” – a social fact – which has also been aggravated by the pandemic. He noted that many young people no longer have the desire to have meetings and assemblies like 50 years ago, and in a way this is a good thing, because “Catholic Action does not doesn’t have to be a Catholic ‘Session’, and the Church doesn’t advance in meetings.”

However, he warned that individualism, closedness in small groups and the tendency to communicate “at a distance” have also infected Christian communities; we must therefore respond to it, starting with “work” on ourselves.

The pope explained that he calls it “work” because “it is a difficult path and one that requires constancy”, because fraternity cannot be improvised and is not built solely with emotions, slogans and events. It is rather a work “that each one does on himself with the Lord, with the Holy Spirit, who creates harmony in diversity”. In this regard, he recommended that those responsible for Catholic Action reread the part of the Exhortation “Christus vivi” entitled “Paths of brotherhood”.

“The starting point is to come out of oneself to open up to others and meet them,” the pope said. It is a “relationship in which we recognize each other and we grow together”. He underlined that the fundamental reality for us is that “in the Church we experience this movement in Christ, through the Eucharist: He comes out of Himself and comes into us so that we come out of ourselves and that we are united to him, and in him we find ourselves in a new free, gratuitous, oblative communion.

The Holy Father also warned against gossip, which he called “the most serious disease in a parish community”. He stressed that he is “not a Christian” and that he is “evil because he divides”.

Pope Francis then underlined in what sense Christians become “leaven” in society, noting that if they are in Christ and animated by his Spirit, they can only be “leaven of humanity” because “Jesus Christ is the perfect man and his gospel is a humanizing force.

He supported the expression used by Catholic Action: “to be kneaded in this world”, saying that it is “the principle of the incarnation” and “the way of Jesus” to bring new life from the interior.

The Pope also urged Catholic Action leaders to allow “leaven to be leaven, salt to be salt, light to be light”, warning that we risk becoming worldly, losing the newness of Christ and to have nothing more to say or to give if we do otherwise. He added that this is what Jesus meant when on the one hand he says “You are the salt of the earth”, and he immediately warns: be careful not to lose the flavor! (cf. Mt 5,13).

The Holy Father then underlined another expression used by Catholic Action: “to be responsible and credible young believers”. He said that these words are embodied by saints – even young saints, and cited the examples of some Italian saints – Francis and Clare of Assisi, Rose of Viterbo, Gabriel of Our Lady of Sorrows, Dominic Savio, Gemma Galgani, Maria Goretti, Pier Giorgio Frassati, Clare Badano and Carlo Acutis.

“They teach us what it means to be leaven, to be in the world but not of the world,” the Pope said.

He also recalled the life of Pier Giorgio Frassati who was an active and enthusiastic member of Italian Catholic Action, and who showed us how to be a credible and responsible young believer.

Learning from the Virgin Mary

Concluding his address, the Pope recalled that October is the month of the Rosary and encouraged them to learn from Our Lady to “keep and meditate in your heart the mysteries of Jesus.”

“Reflect each day on the joyful, luminous, painful and glorious events of his life, and they will allow you to live the ordinary in an extraordinary way, that is to say with the newness of the Spirit, the novelty of the Gospel.

Finally, Pope Francis blessed and thanked Catholic Action for its witness and urged it to move forward with joy and courage.

Monday’s student loan deadline could help some borrowers save thousands