The impact of the Sour Sitrus Society on volleyball matches

Get the latest Syracuse news delivered straight to your inbox.
Subscribe to our sports newsletter here.

Virginia Tech’s Cierra Huntley got behind the service line and regained her composure for her next serve when the Syracuse Women’s Building fell silent. She bounced the ball and from the stands the Sour Sitrus Society, the Syracuse University support group, chanted a loud “A”. For every time she made it bounce, the group went further down the alphabet.

“B … C … D … E … F … G,” they taunted with each bounce until Huntley served. She sent the ball wide to the right and out of bounds, giving Syracuse their third point in the second set.

Later in the game, between the second and third set, the group kept SU’s energy high. Marina Markova and Naomi Franco danced to the group’s interpretation of “Hey! Baby ”by Bruce Channel while head coach Leonid Yelin explained the third set game plan to his squad. Syracuse won the third set and swept Virginia Tech.

The Sour Sitrus Society has given Syracuse volleyball a boost in home games this season through music and chanting, and the team has lost only once in the presence of the squad.

Timothy Diem, the league’s athletic fanfares director, spoke to Yelin about the potential to perform in volleyball games in 2019, a few members of Sitrus said. Yelin agreed, as the Syracuse team were also fans of the idea. Together with Jennifer Albanese, Marketing Director of Syracuse Athletics, Diem decided to have the Sour Sitrus Society play volleyball games. But many Sitrus members also performed in the marching band – which plays at football matches – so the schedule had to be coordinated with that of football.

“(The group) acts as a designated student section and impacts the home field atmosphere by also bringing in positive energy with music and creative cheers,” Albanese said. “Student-athletes feed on it. “

Sitrus didn’t play a game last year due to COVID-19, but the squad have returned this season to support the volleyball team. Of the team’s nine home games so far, the squad have played four, all against ACC opponents. The group did not play in the first non-conference home series in August as they had not yet trained for the season and the group was busy preparing for football matches. 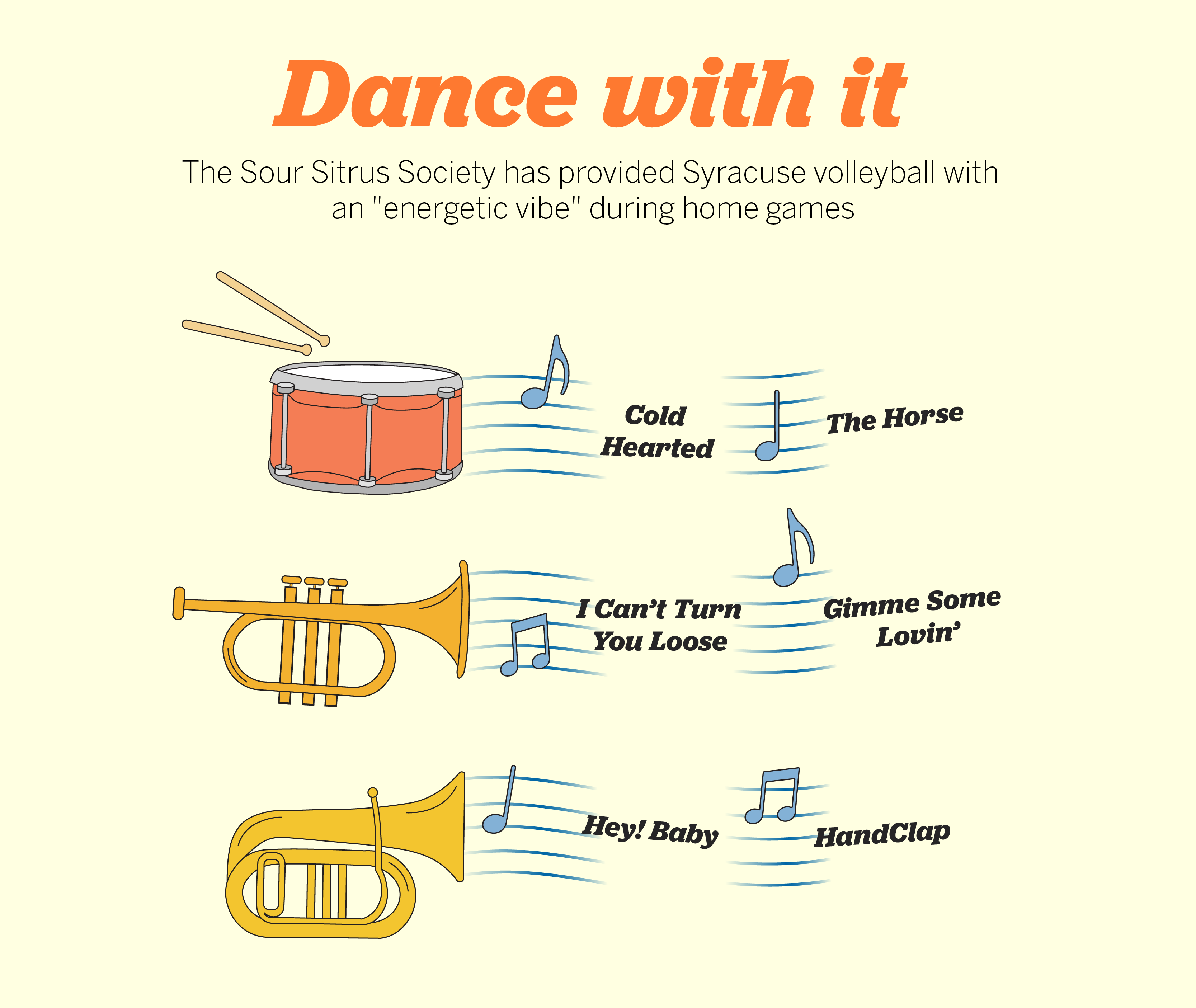 Unlike the marching band which has 185 members, Sitrus has 120 members, 35 of whom play volleyball, Sitrus secretary Kevin Galasso noted. Since most volleyball matches fall on Friday night or during soccer matches, Sitrus only plays certain matches, usually when the team is playing on Sunday, during the week or when there is a soccer match. football outside.

To prepare the games, Sitrus trains for one hour on Mondays in the Carrier Dome. Some students are there for their second consecutive rehearsal, while the marching band is practicing the previous hour. As the band members perform in the Carrier Dome, their sound echoes throughout the 7.7-acre stadium and propagates to the fabric panels 165 feet in the air.

The Women’s Building accommodates fans and players in a cramped gym with minimal space around the 100-by-90-foot hardwood court. The group is seated on the condensed upper balcony which has just enough room to seat its 35 members.

Songs like “HandClap” and “Gimme Some Lovin ‘” bounce off the walls of the court. The members of Sitrus invent impromptu chants such as lyrics from Pitbull’s “Hotel Room Service” and quotes from the movie Shrek to shake up the opposing team.

“The best way to describe it is close and intimate” Galasso has talked about playing during volleyball matches. “We carry a lot of noise, so players can definitely hear what we are saying in volleyball games.”

The squad hardly ever stops playing – between each point and streak they add up to around 30 plays played before the game ends. For all matches the volleyball team wins, the squad ends with “All I Do Is Win “by DJ Khaled followed by the SU alma mater.

The group’s efforts are also not dissatisfied with the team, said Polina Shemanova. At any point in the match, at least one volleyball player can be seen dancing on the sidelines or during a time out to keep the energy alive.

“I’m in love,” outside hitter Shemanova said of the group. “It brings such a good, energetic vibe.”

Yelin compared playing without the band to a party without music, and while he doesn’t dance to the band’s songs like his players, he joked that if the Women’s Building was ever fully packed, the crowd would see him. to dance.

“If we’re going to pack this gym, I will. Absolutely, I will, ”Yelin said.