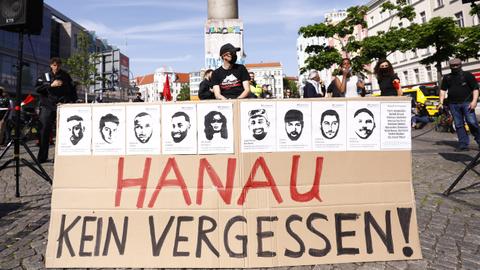 Unless Germany begins to systematically address the problem of right-wing extremism, the commemoration of the victims of the Hanau terrorist attack will only be a well-intentioned symbolic act.

Two years ago, on February 19, 2020, nine people were killed in a racially motivated terrorist shooting in Hanau, Germany. The shooter, Tobias Rathjen, 43, targeted people on the street, in a parking lot, three bars and a kiosk. He also injured six other people. He then returned home before killing his mother and shooting himself in the head.

The Hanau massacre has been associated with a long series of failures by the authorities.

Why wasn’t the murderer’s firearms license revoked when he was investigated and criminally prosecuted – and drew attention with his racist manifesto and his conspiracy theories? Why were the Arena Bar emergency exits locked the night of filming, making escape impossible? Why didn’t the police respond when they were repeatedly called by Vili Viorel Paun, one of the victims, who followed the attacker in his car and was later shot and killed? And why was Hamza Kurtovic’s body described by the coroner as “Southern European, Middle Eastern” when he is Caucasian with blue eyes and blond hair?

To this day, the tragedy is still associated with more questions than answers. Families feel abandoned. They have serious apprehensions and no longer have confidence in a society which they consider to be deeply racist.

The wounds he inflicted on Hanau cannot heal in a state that fails in its duty to protect, with a police that fails to help and a society that does not want to change.

The Hanau shooting was preceded by similar incidents in Hoyerswerda, Rostock-Lichtenhagen, Moelln and Solingen, the NSU complex and Halle. This was by no means an isolated case and similar patterns emerged in all of the attacks: failures by authorities and politicians blaming right-wing radicals rather than societal failings.

Many politicians gave speeches expressing their sadness, anger and horror at the events that had taken place. Many of these speeches incorporated time-worn phrases like “never again” – promises made over and over again and rendered empty in the next attack.

As an ardent liberal, I have developed a healthy sense of skepticism toward the state over the past few years. The State does not have to fix everything, but it must guarantee the safety of the people who live within its borders. This is one of the most fundamental duties of any state towards its citizens.

There are many lofty statements of intent when it comes to the issue of right-wing extremism. And, although they’re usually serious, I always take them with a pinch of salt. Because many efforts to combat right-wing extremism in our country remain mere token policies and good intentions without dedicated action. If we want to make real progress in the fight against right-wing extremism, we must move away from slogans and towards analysis. Unfortunately, there is no will yet to make this change.

This refusal to analyze the situation is the reason why society is regularly stunned by acts of violence. No one had any idea the attacks were going to happen. And our politicians still fail to predict developments in time.

Part of the problem is framing: the face of right-wing extremism has changed dramatically in recent years. Since 2015, right-wing parties have gained electoral support, giving groups bigger platforms and wider audiences.

Although many so-called experts associate neo-Nazis with Germany’s far-right ecosystem, the reality on the ground is different. Far-right groups have already realized that neo-Nazi ideology has no chance of taking root in modern society and is therefore not appropriate as a means of building bridges with the general population.

Instead, strategists are beginning to focus on a combination of far-right ideology and right-wing populism. Problems have accumulated over the past few years and will continue to preoccupy society for years to come.

Today’s social divide is rooted in our sense of identity. On the one hand, people who embrace a multicultural society and, on the other, staunch nationalists. This is not just a German phenomenon; it is also found throughout Europe and the world.

Rejection is not enough

In 2020, the extremist agenda has found a new platform on which to flourish with protests against coronavirus measures. Instead of relying on established organizational structures, extremists participate in events alongside ordinary citizens. Today, they are finding common ground with people who just a few years ago would have rejected them outright, operating under the guise of negotiating freedom when their real intention is to undermine the liberal democratic constitutional structure.

Society’s responses to this development have once again fallen short of reality. These groups are greeted with lamentations and marginalized from politics. Meanwhile, members of society who are not even targeted by politicians suddenly feel ostracized and, as a result of this stigma, link up with extremists simply on the basis of imagined victimhood.

This is a very worrying development. Steps must be taken to identify organizations operating under the guise of defending freedom, and to find out who communicates with people and how. Rejection alone will not be enough in the long term given the current situation.

Shaking the foundations of an unorthodox worldview

A memorial event is planned today at the main cemetery in Hanau. Interior Minister Nancy Faeser, Minister-President of Hesse Volker Bouffier and Mayor Claus Kaminsky will all be present.

It is good, important and right to remember and remind people of what happened and to show compassion for the survivors. However, if we fail to penetrate the minds of right-wing extremists, it will be nothing more than a well-meaning symbolic act.

We need to engage in conversation with them rather than suppressing them through the police, secret services, courts and prisons. If we are unable to shake the foundations of their worldview, victory in the battle against right-wing extremism will always remain beyond our reach.

It would be naive to think that we can prevent all terrorist acts like the Hanau massacre from happening in the future. However, a correct analysis of the contemporary situation in Germany could help identify developments in right-wing extremism earlier, making rapid intervention possible. It may be a way to regain public confidence and it is the only way to heal the wounds inflicted by Hanau.

Disclaimer: The views expressed by the authors do not necessarily reflect the opinions, views and editorial policies of TRT World.