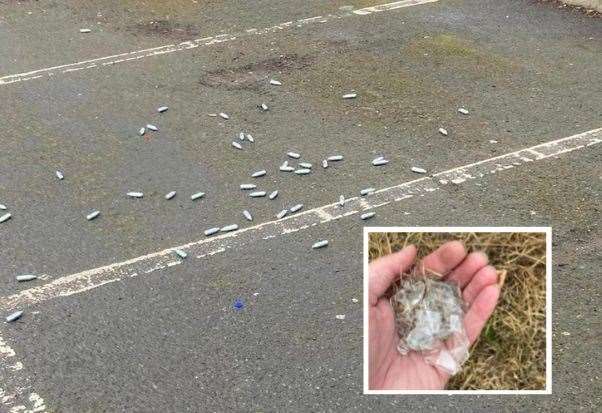 CCTV will be installed in a park after a petition gained traction and anti-social behavior such as drug use, vandalism and attacks on children left some feeling unsafe.

The Medway Council has revealed it will install two rapid deployment cameras in the Rainham Recreation Ground for 12 weeks to monitor its effect on crime rates.

After that, a review will take place to decide if the CCTV helped detect the crime and reduce anti-social behavior enough to warrant a permanent installation.

Last year a petition to reinstall CCTV in the park – led by the vicar of nearby St Margaret’s Church, the Reverend Nathan Ward – was rejected by council due to a lack of resources to fund the measure of security.

In the past, there was a permanent CCTV camera in the park, but it was removed for financial reasons.

Earlier this year, Giovanna Zeuli launched another petition to restore the cameras, and the council has now responded to that petition, saying it has reviewed reports and concerns raised by the public this year and has made the decision to put the cameras on a temporary. base.

Last month, concerns about anti-social behavior were raised after a boy was attacked by two other children on the recreation ground. The boy’s mother said at the time: “We would never go back to this park. I had already heard a lot about it and I had heard several incidents before that.

“I don’t know if I want to live here anymore. I’ve lived in Rainham all my life, but it’s not good that it can happen 10 minutes from us. It’s so different from Rainham. I’m sad my kid I can’t go to the park and just be safe.”

Another mum, who was with the boy at the time of the attack, said: “It’s a place we’ve been going to for years, and it’s our closest park. We’ve been there regularly throughout from lockdown as it used to be a great place for our kids to play and cycle but now I prefer to go somewhere further.

“There are also a lot of electric scooters in the park, and it doesn’t seem safe to me. Along with other stories of assaults and verbal harassment that I’ve heard, I think security measures would be helpful. J ‘ve always thought Rainham was a safe community to raise my family, but now I’m not sure.”

Another mother said her son used to visit the park every Saturday morning but was too scared after seeing another child being attacked. Her children had also found nitrous oxide canisters on the ground, and her son became scared and demanded to leave after noticing people in the park cabin.

Last month, member Stuart Bourne said the group’s aim was to try and change the park’s bad reputation by highlighting the positive side of it. He said: “While it worked to some extent, it wasn’t enough. As we talked to more and more people, we knew how unsafe they felt. , especially when walking in the park at night.

“That’s why we created a petition last year, calling on Medway Council to install CCTV in the park, to discourage and catch those causing the problem.

“A year later we are still seeing the same anti-social behaviour. The broken beer bottles, vandalism, graffiti and fights. We are contacting Kent Police but they have very limited resources due to underfunding .

“So in the end, we do our best to clean up the mess afterwards, but the root causes are still ignored.”

In response to the announcement of the CCTV installation, the group said in a statement: “We are obviously incredibly delighted that after years of being ignored and dismissed by local councilors and council officers, after a petition last year with 416 signatures, after so many complaints and newspaper reports, Medway Council finally listened.

“We want to thank Giovanna Zeuli, a local resident whose recent petition seems to have been the final straw that finally broke the council’s camel’s back.

“That being said, these are just temporary cameras and it is eerily close to local elections in six months, so we will continue to keep the pressure on the council to keep them permanent and make our park safe.”