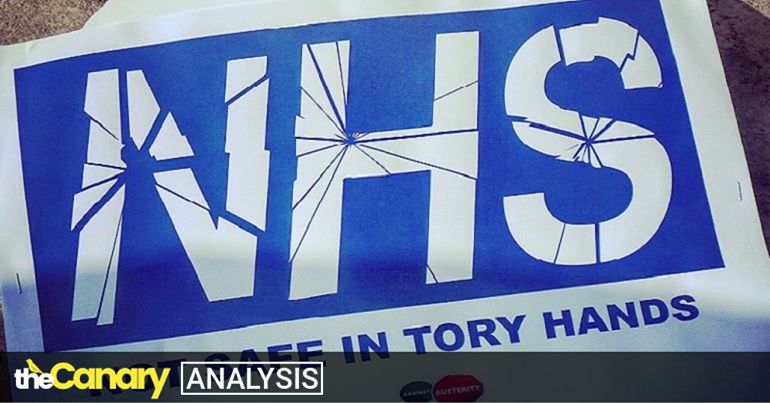 “Every penny spent on privatization and outsourcing is a penny less spent on patient care. Labor will end and reverse privatization in the next parliament ”- It’s time for a real change, the 2019 Labor manifesto.

The 2019 Labor manifesto pledge of a common and public national welfare service – to work alongside a renationalized health service – would have saved the NHS. And that would have brought social care to the same level. Tragically, these policies, which are essential for our continued right to free health care when we need it, are now further from becoming a reality than they ever have been.

The Conservatives’ upcoming health and care bill threatens to introduce Integrated Systems of Care (ICS) into the NHS. Integrated systems of care will ensure that NHS England shares responsibility for delivering health services with boards and, more worryingly, private companies. The legislation will also further dilute our legal right to health care. It will do this by removing the “legal obligation” of the NHS to organize hospital medical services.

According to Dr Bob Gill, NHS GP and producer of The great heist of the NHS:

The private insurance industry is taking control of NHS budgets. US insurance giant UnitedHealth / Optum is in a privileged position to control money, replicating its dominance of state-funded Medicare / Medicaid in America. UnitedHealth has been built into the structure of the NHS for over a decade now and leadership in the form of Simon Stevens from 2014 until this year he was raised in the House of Lords, no doubt to secure the passage smoothly from its legislative purpose.

ICS is modeled after Kaiser Permanente’s “managed care” in the United States. They have matured and have been operating in a phantom form for the past few years, called Responsible Care and Sustainable Transformation Plans. The change of name does not mean a change of mind. The managed care business model is profit maximization through denial of care.

ICS Cards [ICBs] will be dominated by corporate interests [through] membership by proxy as NHS employees recruited from the private sector. The best example of a corporate attorney is Simon Stevens himself.

AOIs will have fixed budgets and autonomy to create “value” and “efficiency”, or in other words profit. Profit will be realized through denial of care either at ICS level (3 million people) or at individual level using insurance industry risk stratification tools and algorithms to replace medical assessment. Your GP or your consultant has indeed deviated from the decision about your care, especially if it is expensive.

The NHS has been gutted of its original philosophy and purpose, leaving behind a logo and a budget that private companies can control for their own purposes. We are at a point of no return.

As a result of these changes, the Health and Care Bill will level our NHS so that it resembles the disastrous welfare model that our most vulnerable populations are currently lacking. Social protection is a mess in the UK. The management of care budgets is left to cash-strapped councils who contract private providers to do the work on their behalf.

Social assistance has essentially been transformed into a flow of finance used to funnel public funds into the pockets of private companies. The result has been a chaotic system and a lottery of postal codes, which means that the availability of care depends on where you live. And the conservatives’ socially regressive rise in national insurance will now disproportionately affect the less well off, having to bear the brunt of supporting a failing system. A system in desperate need of complete reconstruction through nationalization.

Nonetheless, the proposals are arguably less gruesome than Labor’s contribution under Keir Starmer. Labor has made only vague commitments to services provided in the community. And it no longer appears to be committed to providing pooled care through a national welfare service. Worse yet, Shadow Health and Welfare Secretary Jonathan Ashworth has confirmed that Labor’s plans will be funded by “savings”: the preferred euphemism of the government of David Cameron for the cuts. It appears Labor has pulled back to accept the existing system, while tinkering – and possibly reducing – the availability of existing services.

Adding insult to injury, it appears Labor is no longer even committed to the basic principle of public ownership of the NHS. Responding to Conservative proposals on the health and care bill, Ashworth said “allowing more unsupervised privatizations will meet strong resistance from Labor”. Of course, this statement implies that existing privatization is acceptable, as is future dismemberment of assets, as long as there is “oversight”.

This was pointed out by Starmer in his conference speech. He suggested that, if elected, Labor would agree to cuts in service delivery. Regurgitating the false argument that it is not possible to forever guarantee needs-based NHS funding increases, Starmer said:

There is no doubt that the NHS needs more money. And a Labor government will always properly fund the NHS. But the future of the NHS cannot be simply to seek additional demand with more money. And neither can it be about redistributing the furniture in another unnecessary reorganization.

We would shift the priority in the NHS from emergency care to prevention.

This is an important moment for Labor. Opposition to yet another ‘unnecessary reorganization’ signals the party leadership’s decision to drop the 2019 manifesto pledge to end and reverse the privatization of the NHS. To reverse privatization would require primary legislation and reorganization to remove the outsourcing and asset stripping structures already in place.

And while Starmer suggests that “a Labor government will always properly fund the NHS”, it hinges on a policy of cutting costs through “prevention” and community care. If this sounds trivial, it should be remembered that the purpose of the Health and Care Act is to remove the obligation for NHS organizations to provide hospital care. In other words, an NHS that is no longer required by law to provide hospital care will not “need” as much money. It is a situation which encourages more and more “savings” through service reductions, which the law now allows. Starmer’s speech confirms that, under his leadership, the Labor Party broke with the founding principle of the NHS: comprehensive care, free when needed.

The existing system of managing the privatization of the NHS, which Starmer’s Labor Party seems so keen to keep, quickly turned into a disaster, as did welfare policy. Frighteningly, the fragmentation, outsourcing, privatization and downsizing of essential health services are already well advanced. And the NHS is on its way to becoming, like welfare, an administered funding stream for the benefit of big business.

Almost a decade ago, the Conservative and Lib Dem government’s Health and Social Services Act 2012 removed the Secretary of State’s legal obligation to provide comprehensive and free health care to all residents. from England. The “reform” was, in fact, the NHS Abolition Act.

He introduced privatization through competitive bidding and the outsourcing of vital health services to private companies. It has set up regional Clinical Commissioning Groups (CCGs) to manage the diversion of public funds to private health care providers. Nationally, NHS England was created to oversee the process of asset stripping. This has allowed the government to keep its hands off the dirty work of outsourcing responsibility for the many failures to NHS England. Simon Stevens – former executive vice president of the company and chairman of private health giant UnitedHealthcare – has been appointed chief executive of NHS England.

At the same time, austerity meant that NHS budgets did not increase as needed. And large sums of money have been wasted on overly complicated reforms.

Now the NHS is self-privatizing. The NHS, as a brick and mortar institution, is dying out. The new health and care bill will only add to the existing binge eating. The latest conservative “reforms” will phase out GCCs only to replace them with a more streamlined system of NHS asset stripping. They are therefore not the beginning of the process of privatizing the NHS but its completion.

Saving the NHS by ending and rolling back privatization and establishing a functioning welfare system can no longer be achieved simply by voting. We – ordinary people – are going to have to fight for this ourselves. But there is hope, because the socialist militant group COSMOS has a plan to do so.

Under the new legislation, local authorities will share responsibility for delivering health services with NHS organizations. In some areas, they are already helping the asset dismemberment process by purchasing land sold by the NHS for use in housing development programs. COSMOS has drafted a model motion that can be submitted to local councils across the country. He urges the councils to pledge to oppose any action that helps the privatization of the NHS. He also urges them to commit to ending the use of PFI agreements in building facilities to serve patients who depend on publicly funded social services.

You can find it by following this link to the COSMOS website.

Democratic voters see many losers in party schism and one winner: Trump