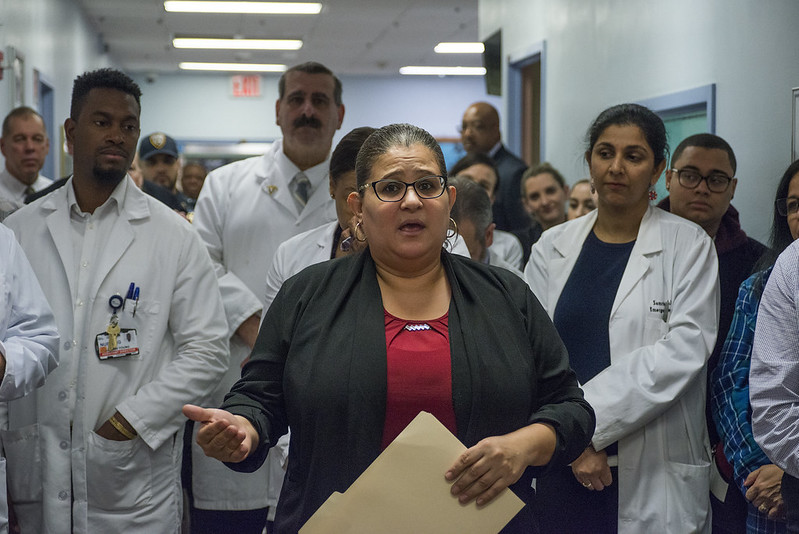 The president of the New York City Council should be someone who deeply understands the struggles of the people and who will focus on social services in a position of powerful leadership, argues City Council member Diana Ayala.

During a recent appearance on the Gotham Gazette’s Max Politics podcast, Ayala spoke about her experience as a representative of the council’s 8th district, which includes East Harlem and the South Bronx, the city’s approach to mental health care, the effort to shut down Rikers Island, his bid to become the next chairman of city council, and more.

“I have suffered from homelessness, food insecurity, I know what it is to be on the verge of eviction, I come with a different point of view, don’t I, on issues that matter most to my constituency, â€Ayala said. â€œThis level of experience is important because people like me, I see myself as a very social service oriented member, understand the nuances of government because these are our lived experiences. We haven’t read it, we haven’t heard of it, we don’t just sympathize, we understand it very intimately because it has been our experiences.

After this year’s municipal elections, the race to become the next chairman of the city council is in full swing, with Ayala among seven candidates, all Democrats, vying to be nominated by their colleagues as legislative leader. The 51 council members, only a handful of whom are Republicans, will vote on the new president in January, but it’s likely someone will block the required 26 votes before the new year, as is tradition. Besides the Council members themselves, there are many other influential figures involved in the selection of the Council President, including unions, members of Congress, others elected like Mayor-elect Eric Adams, and more.

The chairman of the city council is essentially the second most powerful elected official in the city government, with considerable influence over the legislative agenda and timetable, important committee duties that impact both legislation and oversight , a major role in negotiating the city’s massive budget with the mayor, controlling some funding pots, the intimidating chair to impact public policy in multiple ways, and more.

â€œThe fact that we don’t have Latin American representation in city-wide positions is important to me,â€ said Ayala, who was born in Puerto Rico and represents a district with large Latin communities. Americans, about what sets her apart as a candidate for city council president. â€œSecond, there are no women in city-wide positions, that’s important to me. But most important is the fact that we lack leadership that is somehow aligned with the issues that impact communities of color like I am. “

In the podcast, hosted by Gotham Gazette editor-in-chief Ben Max, Ayala spoke about her experience as the former chair of the council’s committee on mental health, disabilities and addictions. Explaining that she has three close family members who suffer from bipolar disorder, including her brother who she says has been jailed multiple times, Ayala said she spoke out about the government’s “shortcomings” ‘he was trying to fight mental health.

Ayala said the Blasio administration’s Thrive NYC mental health program was struggling, but also didn’t necessarily get the credit it deserved amid a lot of criticism. â€œI really mean the First Lady deserves a lot more credit than she gets,â€ Ayala said of Chirlane McCray, the wife of the mayor who spearheaded the launch of Thrive NYC. “I think most people didn’t talk about mental health the same way we talked about mental health.”

While saying the program heralded a “much needed first step” in solving mental health issues, Ayala also acknowledged her flaws and said she wanted to see more resources available to New Yorkers with mental illnesses. serious, including those who are incarcerated or released. Better services can help prevent people with the most serious mental illnesses from being incarcerated, she said.

â€œWe have to start building these relationships before the release, because a lot of times they don’t make it to these dates,â€ Ayala said, drawing on her brother’s experience. â€œThey’re required and expected to fill out their own requests to make this appointment, to show up, and a lot of them, quite frankly, just don’t have the mental capacity to do that. For me, it’s the equivalent of asking a child to take the necessary steps to access care. I think unfortunately they need a bit more getting started and our system just isn’t really prepared to do that.

Ayala also spoke of her efforts to support the closure of the Rikers Island prison complex and the construction of four new prisons, including one in her district in the South Bronx. Since the plan was announced, with Ayala’s backing, there have been criticisms of the planned prison at Mott Haven. Ayala said that while she has not advocated for the new prison to be placed in her district per se, she supports her given the importance she places on the closure of Rikers Island, the use of a site owned by the city and the relative proximity to their loved ones and the courthouse for the Bronxites who are ultimately imprisoned there.

“I understand, it’s true, it’s a very difficult pill to swallow, but I think there’s a bigger picture here and I think it has the potential to do a lot of good in terms of reducing recidivating and keeping families connected and ensuring that people have equal access to health care, to mental health care, whatever you want, â€Ayala said. â€œI mean, there are so many benefits to that. So if they find a better location, I’m also in favor of that, but it has to go somewhere. Borough, which was approved by city council two years ago and is moving forward in the design and construction process, the Bronx site is unlikely to be changed.

Asked how East Harlem’s rezoning went, Ayala said she believed everything was going well so far, several years after it was adopted by her predecessor, then-board chair Melissa Mark-Viverito. , for whom Ayala had already held several positions. be elected to replace Mark-Viverito while she was absent for a limited term.

â€œI think when people hear the word ‘rezoning’ they automatically assume a move. And I think in this case, we were very determined about the locations that were being dezoned, â€Ayala said, noting that travel had decreased since the dezoning started. â€œI think that for us, the dezoning was not negative.

In the last segment of the podcast, Ayala discussed her relationship with mayor-elect Eric Adams and how she presents herself to her colleagues while trying to become the next chairman of city council.

Recognizing that she has the support in her candidacy for president of Mark-Viverito, the former president, and of the United States representative Adriano Espaillat, Ayala said that among the next class of members of the Council, as of the recording of the podcast Nov. 24, “we have a block of about seven or eight members today that are hard engagements, and then, you know, several more that have also expressed interest in supporting who are sort of trying to figure out how to work out. through some of their own internal policies.

She declined to name any of those seven or eight “hard engagements” beyond elected council member Althea Stevens, who had previously spoken to City & State of her support for Ayala.

â€œI see myself as a leader who will work closely with the new members,â€ Ayala said. â€œReally, really excited about the new class of new members. We have a lot of really great new talent, a lot of wonderful new ideas, just really great energy … I was very careful not to create my own platform or my own agenda. Because I think it would be irresponsible to do this without really having more solid conversations with new members about their priorities. “

As for mayor-elect Adams, who also grew up in New York City under difficult circumstances, and who works with him if she leads the council as president, Ayala said in part:

â€œI think for the members it is important that we maintain a level where we are the checks and balances for the administrator and that means that has to be protected at all times. But we all look forward to a working relationship with the new administration, and I’m excited about what it means. I think the mayor-elect and I have a lot in common, in terms of personal stories and education. I am very happy to see what this translates into in terms of his political work. But of course, we are here to work. We are here to get things done and we will do it as kindly as possible and as professionally as possible. But, there should be no misunderstanding that when we have to push back as a body, we will push back. “

Sports and society: locked out