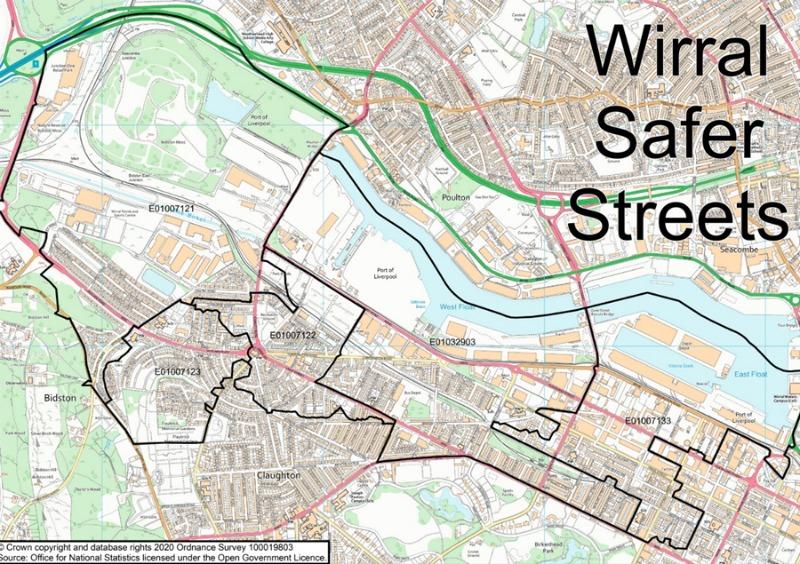 A community day will be held this week to show how the second phase of funding from the Wirral ‘Safer Streets’ project has been used in parts of Birkenhead and Seacombe to make these areas safer.

Earlier this year, the ‘Safer Streets 1’ project saw an investment of £ 550,000 in the North Birkenhead area.

The money was used to upgrade the existing CCTV to digital, complemented by the creation of a new CCTV control room which is equipped with a state-of-the-art digital video management system.

In the community itself, 43 alleys have been installed; 18 days of community cleaning took place and street lighting was improved.

In addition to improving security in the area, feedback from this first project also saw other benefits for local residents, including improved and more secure common spaces; a safer environment for children; improved community relations; fewer tips and house price increases.

Based on these successes, the Wirral Council, Merseyside Police and Police Commissioner Emily Spurrell have won a bid for an additional round of investment to run a second Safer Streets project, focusing on new locations in the center. from Birkenhead and Seacombe.

This latest project aims to reduce burglaries by five percent and will also include work and initiatives to combat anti-social behavior; fires; drug traffic; drug-related crime; tilting of flies and fouling of dogs.

With funding of £ 432,000, these initiatives will include new and improved video surveillance sites; installation of new alleys; several days of community clean-up; updated public lighting and a series of target hardening measures.

As a mark of celebration, a community day will be held on Wednesday December 15th and members of the communities of Seacombe and Central Birkenhead are invited to join us.

The Seacombe event, which takes place on Borough Road between 10 a.m. and 11:30 a.m., gives community members the opportunity to meet local council, police and business representatives, who can talk about the benefits of ‘Safer Streets 2 », While being attentive to their possible concerns. Kids from nearby Riversdale Elementary School will jump on the Christmas swing with a special Christmas carol concert.

In the afternoon, the event moves to the shopping area outside the Pyramids Shopping Center on Grange Road, Birkenhead, between 1pm and 2pm.

This event aims to put more emphasis on local business and economy and members of the public will be able to speak to a range of people from local shops and businesses, as well as representatives of the Wirral Council and the Merseyside Police, who will be on hand to talk about the positive impacts of these new initiatives in the region.

“Crime and anti-social behavior don’t just degrade a neighborhood, but can make people who live there feel like no one cares.

“Investing in preventative approaches like gates and street lights, even though they may seem small, can make a big difference in helping people feel safer and happier. Everyone deserves to feel safe in their home and in their local community. ”

Local Police Superintendent Martin Earl said: ‘The Safer Streets project has been a huge success for the Wirral, receiving over £ 980,000 in government funding which has helped us tackle some of the hot spots. keys and have a real impact on reducing the problems of crime and anti-social behavior.

“Everyone who comes together to celebrate these accomplishments during this community day is a really important way to communicate the impact that these initiatives have had and will continue to have in the future.

“It also gives our police team the opportunity to speak directly to our communities, listen to their concerns and learn how we can work together to make a difference.”

Merseyside Police Commissioner Emily Spurrell said: “This event is a fantastic way to come together with the community to celebrate the achievements of the Safer Streets projects on the Wirral.

“With the decline in burglaries, theft and vehicle crimes and rising housing prices in the area and cleaner and safer environments for residents and their children, it is clear that these projects have already been a success. major, and the benefits are expected to last for many years to come.

“I can’t wait to visit these areas to see how they have been rejuvenated and meet with partners, business owners and residents to learn more about the impact on them and get their take on how we let’s continue to make their streets safer. ”

Autonomous reconciliation must end | The hill