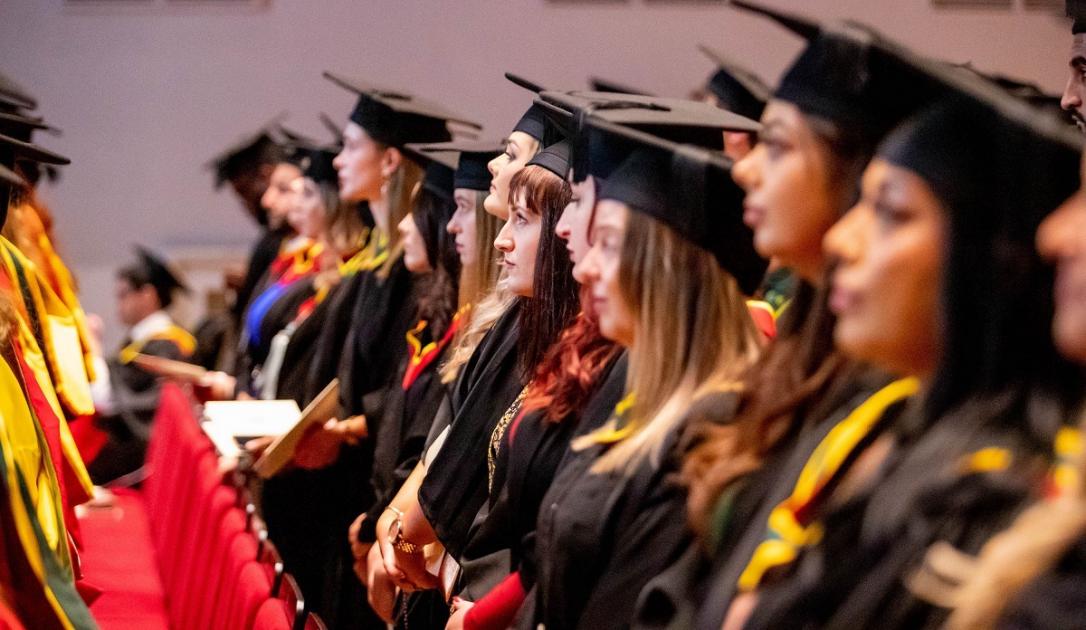 Hundreds of students took part in an emotional day on Friday as the Class of 2022 graduated from Bradford College.

In the morning, diplomas, higher professional and technical qualifications were awarded by the Schools of Engineering and Construction, the Bradford School of Art, Science, Medi-tech, Allied Health and Computing, and Business, Accountancy & Law.

Bradley Cook-Pattison, who graduated with a BA (Hons) in Performance from Bradford School of Art, said: “I feel very nervous, but absolutely proud to be here. I am the first person in my family to come to college and graduate. I feel absolutely honored to be identified as an elder.

Another graduate, Nasreen Akhtar, earned a Foundation Diploma in Educational Learning Support and Management from the Margaret MacMillan School of Education. She said: “I am proud of myself. Both of my children were doing their GCSEs when I had brain surgery at the time. I tried to get a tutor for my children, but it was too expensive. So, I came back to university to redo my English and my maths. Bradford College is like my second home – I’ve been a student since 2016!”

At the ceremonies, Bradford College named two Honorary Fellow Awards – the highest title the College can bestow on an individual. The awards began in 1933 and are given to inspirational individuals who stand out for their outstanding contribution to their fields, to the College or to the city of Bradford.

This year, the Chief Executive of the Muslim Women’s Council, Bana Gora, received the award for her campaign for women’s rights in the city and beyond. Bana is a former student of BTEC National Business Studies.

Neil Bedford, acclaimed photographer and former fashion graduate student, also received the award for his distinguished career and his inspiration to a generation of young creatives.

If you’re inspired by these incredible stories and want to explore degrees here in Bradford, learn more by getting free advice and guidance or visit a Bradford College Open Day. For more details go to www.bradfordcollege.ac.uk

Bana co-founded the Muslim Women’s Council in 2009 – an independent charity based in Bradford.

In 2015, she announced plans to build the first female-led mosque in the UK as a community centre, offering advice and acting as a symbol of inclusion for all women.

Bana has been involved in social policy and community engagement at the local and national level, working directly with ethnically and religiously diverse communities and marginalized groups.

Bana also founded a weekly food initiative called Curry Circle, which supports the homeless and those in need.

In 2019, Vogue announced Bana as one of the top 25 women shaping Britain’s future, alongside names such as Naomi Campbell and Phoebe Waller-Bridge.

Bana was the first Muslim woman to receive the Peacemaker Award in 2021, and she has inspired many women with empowering messages.

Neil Bedford, a former Bradford College Fashion student, graduated alongside the class of 2022 – now an internationally renowned photographer working with some of the biggest brands in the industry.

Since leaving Bradford College, Neil has been commissioned to photograph some of the most famous athletes, musicians and actors of our time including Pharrell Williams, Kobe Bryant, Ed Sheeran, George Ezra, Emma Raducanu and David Beckham.

In his moving speech, Neil paid tribute to his former Bradford School of Art tutor, Angela Loftus: “When I met Angela, I felt like I suddenly had someone who completely understood and saw my true potential, pushing me to do more and be Suited. She had the knowledge I needed and the industry experience to back it up. Without people like her, there would be no no people like me out there doing what we love – so thank you.

CHRIS Webb, Principal and CEO of Bradford College, pays tribute to this year’s graduates: “On behalf of Bradford College, our staff and the Governors, I would like to take this opportunity to congratulate those of you who have received awards . We take great pleasure in celebrating with you, your friends and your family, the end of your higher education. Many of you have overcome challenges on your journey to earning your qualification, often managing competing demands such as family commitment or work, which makes your success all the more remarkable. Today’s ceremony marks a new beginning for you – whether it’s a graduate career, further education or incredible new opportunities. We hope you will have very special memories of the College and of Bradford. You are now a Bradford College alumnus, joining a family of graduates who have achieved remarkable success in life. Congratulations to all of you.

‘Victims are not a priority’: Yorkshire councilor shares vigilante fears in Ossett over rising anti-social behavior