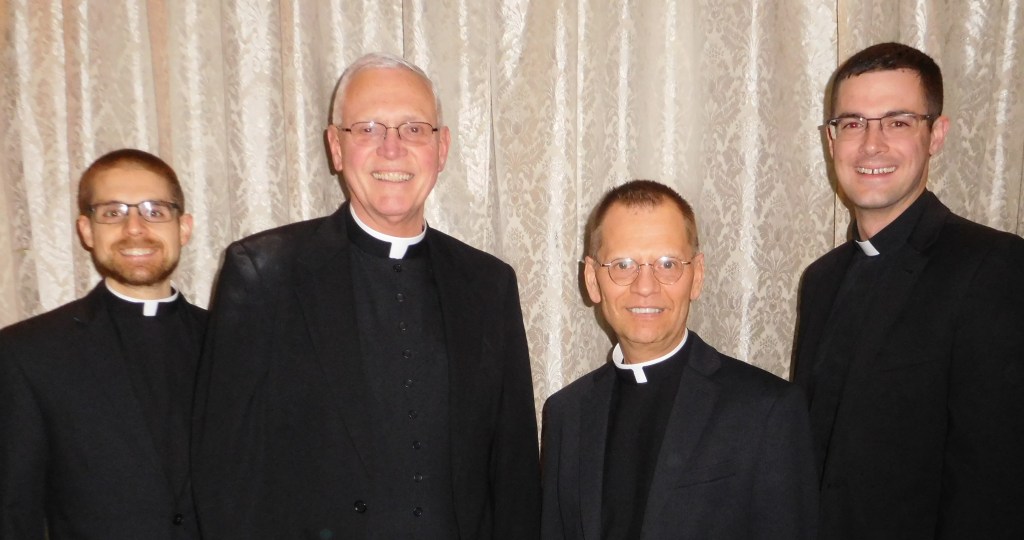 “Where love leads to action” is more than just a slogan for members of Christ Child Society of Western Reserve. It is a way of living, of praying and of giving.

While the Christ Child Society was founded in 1887 in Washington, DC, the Lake County chapter was formed in the mid-1980s and now has over 300 members.

In 1983, the Reverend Thomas Johns was appointed spiritual advisor to the chapter by Bishop Anthony Pilla. And he has held that position ever since.

“I was appointed around the same time I left my associate position at St. Gabriel Parish in Concord to become a professor at (Borromeo) Seminary,” Johns said. “I really enjoyed the time I spent serving as pastor and knew I would miss the interactions with parishioners once I moved to college. But working with this group, seeing their dedication and involvement helped me. It was inspiring and they became like a church (congregation) to me.

This year, as Johns plans to retire, the Christ Child Society of the Western Reserve has decided to honor him for his 39 years of dedication as a chaplain and spiritual advisor. And he decided to do it by throwing a big party with 600 guests.

The Red Wagon Reverse Raffle recently took place at the LaMalfa Party Center in Mentor. The buffet and bar opened at 5:30 p.m. and in true LaMalfa style, the buffet tables were covered with delicious offerings – from several kinds of salads, charcuterie boards, raw vegetables, pasta, salmon and more, including their round carved steamer boat. with all the trimmings. Dessert tables were filled with assorted cakes, baklava, poppyseed rolls, cannoli and other sweet treats, including pies from Patterson Fruit Farm in Chester Township.

LaMalfa’s “Grand Buffet” offered guests the choice of having a meal shortly after arrival or opting to eat later, after checking out the silent auction tables, buffets and many other activities available.

Under the leadership of Red Wagon Committee Chair Stacey Smaretsky and Co-Chair Karen Munson, the committee worked hard to secure the many donations needed to successfully host an event of this magnitude. The new members were responsible for the 13 outstanding baskets, while the senior members worked to collect the 17 silent auction items. Three luxury items were also available. George and Sonja Maier, Dee Aufuldish, Joe and Sue Manning, and Bill and Marge Gibb were seen trying to decide which items to select for their offerings.

In addition to auction items and baskets, there was a raffle, buffets and a wine draw. But there was also a tabletop auction. Each table received a numbered envelope for their donation. People who decided to participate deposited $5 in the envelope. Once all the envelopes were collected, the lucky envelope was drawn – the winner was Table 15! The final payment was $1,000. The lucky auction winners were John and Monica Brems, Donna Regal, Jamie and Mandy Hart, Lucy Bonfiglio, Sharon Scribbick, Katie Cooper and Jason Schmitt.

Society President Bobbie McArthur and Past President Donna Perrine both mentioned their enthusiasm for the event as it is the first time it has been held in the evening.

“Oh, that’s phenomenal,” Perrine said. “Just look around in this room!” McArthur added how pleased they were with the number and quality of donations for the auction.

While many silent auction items had participants trying to outbid throughout the night, this was the opportunity to enjoy dinner with Johns that was one of the most popular. When bidding reached higher than expected, Johns offered to host two separate dinners, prompting a committee member to comment, “Can you believe he did that? That’s why we love having him on our team.

To further celebrate Johns’ commitment to Christ Child Society, they established a $20,000 scholarship fund in his name for Lake County Catholic schools. “I am touched by this honor,” he said. “Working with this group continually confirms my belief in the importance of lay people in our parishes. It was indeed a gift for me to work with them.

The evening ended with local band Body and Soul providing the music, led by St. Bede’s pastor, Reverend Timothy J. Plavac. Prof. Tim and the rest of the band members donated their time and talents to help make the evening a success.

St. John Vianney parishioners Camilla D’Andrea and Denise Ahlstrom came to the event to show their support for the work Johns is doing with Christ Child Society as well as their parish.

“He’s a good leader and we appreciate him being our pastor,” D’Andrea said. “We couldn’t have missed that.”

Members of Christ Child Society of the Western Reserve operate and run ‘The Clothing Cottage’ – a popular resale store in Mentor. Revenue from the shop is another source of funding for the group’s work with children. The Clothing Cottage sells gently used clothing, shoes and accessories for men, women and children and welcomes donations of new, gently used and like-new items. For more information, call 440-350-9836.

According to early estimates, the Red Wagon Reverse Raffle raised $30,000.

Philly Startup Leaders’ next accelerators are for food innovation and blockchain