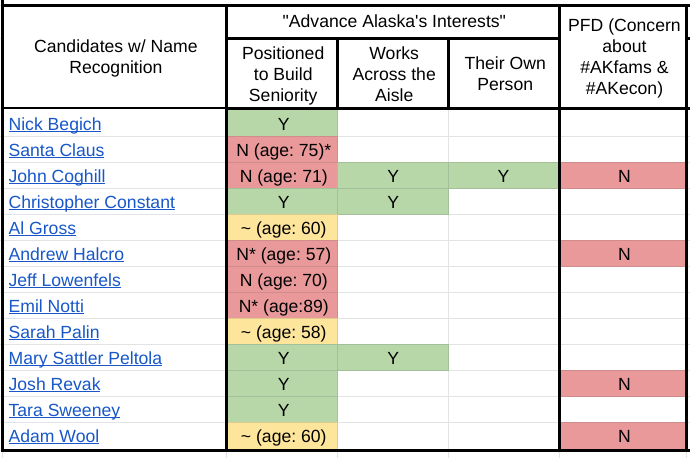 Brad Keithley’s Chart of the Week: Our chart for the Special Election

We use charts not only to do analysis and help explain our position to others, we also use them to help us organize our own thoughts when brainstorming issues.

In that vein, we’ve started putting together a chart for the upcoming Congressional Special Election to help us sort out our thoughts on the various candidates. In addition to our state-level activities, Alaskans for Sustainable Budgets is also engaged at the federal level through our involvement with federal tax groups Committee for a Responsible Federal Budget and the Coalition Concorde. Our table reflects our experiences at this level.

As with campaigns, the graph is in its infancy, largely based on first impressions. But we have to start somewhere. We build it to focus on what we think are the important deciding factors among candidates.

The first cut, of course, is which of the candidates has a chance of finishing in the top four in the special primary election. In our initial screening, we identified 13 candidates who have statewide name recognition based on previous public office, corporate positions, or, in Santa’s case, name alone.

The use of this criterion for the initial sorting undoubtedly overlooks certain candidates who, by the strength of their position or their personality, could potentially climb into the top four. But with just 70 days between filing and the date of the special primary, the initial advantage is sure to go to those who are already at least somewhat familiar to voters. If there are others who are able to overcome this initial inconvenience as the campaign grows, we will definitely add them to the list.

Once we identified those with a chance of making the top four, we started sorting further based on various criteria. Red means “no” or does not meet the criteria, green means “yes” or meets the criteria, yellow in any category means on the fence. The blank spaces in any of the rows mean “to be determined” as we hear and read more during the campaign.

Our initial sorting into these categories is based on how well the candidates are positioned to “advance Alaska’s interests” in Congress.

In an earlier version, we titled this column “Take Home the Bacon.” But some thought we were only talking about money. To be clear, we mean this in much more than the monetary sense.

In our first look, we use three criteria to assess a candidate’s ability to “advance the interests of Alaska” in this broader sense – ability to gain seniority, ability to work in the aisle and whether he is “himself” or, instead, someone likely to be drawn into one or another segment of the partisan factionalism that characterizes the current United States House.

Because the House awards power largely based on seniority, we consider an Alaskan candidate’s ability (and commitment) to build and maintain seniority to be critical. While other states with multiple representatives may rely on various members with varying levels of seniority serving on various committees or in various caucuses to advance their interests, Alaska has only one member. Building power through seniority is, realistically, the only avenue open to Alaska to have a real voice in the House on federal issues.

Although a candidate’s ability to accumulate seniority over a period of 10 to 15 years and to maintain it thereafter is largely related to his age, it is not the only criterion. Seniority is based on time spent in Congress. Some may be more “senior” in this sense than others in just a few weeks or even days.

With the anticipation that the upcoming November election will see a number of new Republican representatives elected to Congress, the Alaska Special Election provides an important opportunity to make Alaska’s representative more ” senior” than the others in the few months peloton. Candidates who only offer to serve former Congressman Don Young’s remaining term are effectively suggesting that Alaska forfeit the opportunity. We should not and weed out candidates for this position.

The second and third criteria are somewhat related. With the House periodically rotating between Democratic and Republican control, the Alaskan representative must be positioned to pursue Alaska’s interests — be positioned to “bring home the bacon” — regardless of which party is in control. It means developing the ability to work across the aisle and avoiding getting trapped in hyper-partisan factions – on either side – that make it harder to build those relationships.

It also means forging and maintaining positions that best serve Alaska’s interests, avoiding the usual “moving forward to agree” push from the leadership of either political party. .

There are many opportunities to achieve these goals. The House already has a bipartisan Problem Solvers Caucus, made up of equal numbers of Republicans and Democrats, that focuses on developing working relationships among members across the aisle. Others, like Congressman Young did, use their committee positions to forge such relationships.

Regardless of how they are achieved, however, it is essential to keep Alaska’s broader interests at the forefront and avoid falling into a hyper-partisan clique or a “go for it to get along” approach.

While Texas with its 38-member bipartisan delegation, New York with its 29, Georgia and Michigan with its 16, North Carolina with its 15, Arizona and Massachusetts with its 11, Minnesota with its 10 and even Colorado with its 9s can afford to have one or two that focus more on hyper-partisan activity than legislation, Alaska with its one cannot.

Our next criterion is odd to some, but we think it’s as important as any. If they took one, we focus on the candidate’s position on the PFD.

Some are quick to argue that because this is a purely state matter with no federal analogue, a candidate’s position on the PFD should be irrelevant. Others argue that it is unfair because while current legislators have been forced to take a stand on this, candidates from other backgrounds or who may have served in the Legislative Assembly in an earlier era will not. have not done.

While both factual predicates are true, we nevertheless believe that when they took a public stance on PFD, it is relevant to our assessment of their qualifications.

For us, the PFD is a clear matter, “special interests” versus the general interests of Alaska. As we’ve seen in previous columns, using PFD cuts to fund the government has the “largest negative impact” of all income options on 80% of Alaskan families and the entire Alaskan economy. The only beneficiaries are the richest 20%.

Once beyond these categories, we intend to examine the candidates from the perspective of whether they are separately “conservative”, “centrist” or “progressive” on two general sets of questions: “fiscal and “social/cultural”. The reason we separate them is that, like Sen. Joe Manchin (D – West Virginia) and others, some may be “fiscally conservative” while being “socially centrist” or even “socially progressive.”

Also, although it may prove impractical to implement, our initial table leaves room in each category for gradations of “conservative”, “centrist” or “progressive”, to capture the subtle differences in the positions of candidates. The table uses an “X” to identify where the candidate falls on the spectrum separately on the two general sets of questions.

Although we initially placed “X”s in the spectrum for most candidates on both sets of questions, they are largely based on first impressions based on their past votes, whether they are current or former lawmakers, or when they are not, statements or, in the rare cases where the candidate has already posted, the positions exposed on his website. They will be updated as campaigns develop and candidates define more definitive positions.

While we don’t plan to update this table every week like we do others, we will as new candidate information becomes available or as issues arise. take place, we believe that our criteria should be updated. We will post these updates on our Facebook, Twitter and LinkedIn pages for interested readers to follow.

Brad Keithley is the executive director of Alaskans for Sustainable Budgets, a project focused on developing and advocating for economically sound and sustainable state fiscal policies. You can follow the work of the project on its website, at @AK4SB on Twitter, on his Facebook page or by subscribing to his weekly podcast on Substack.