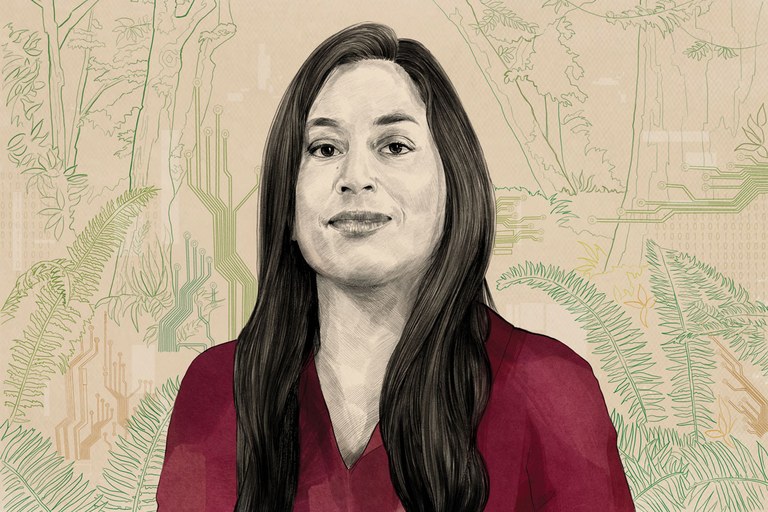 Vauhini Vara began his career as a journalist in Silicon Valley in the early 2000s. Back then, the potential for tech companies to build community and connect people around the world seemed endlessly promising. But just a few years into her career as a journalist, Vara became concerned, not just about the industry’s dizzying growth, but about its increasingly unchecked power. It was then that she turned to fiction, earning her MFA at the Iowa Writers’ Workshop.

“In fiction, you can imagine these futures that aren’t there yet,” she said. “It’s not irresponsible to do that, it’s one of the things that fiction can do really beautifully and really well.”

Immortal King Rao, Vara’s debut novel, imagines a dystopian future where the tech industry isn’t just unregulated; it is the regulator. It is government—on a global scale—that shapes all aspects of the lives of “shareholders,” that is, citizens. At its head is King Rao, who was born into a family of Dalit coconut farmers in India. Eventually, King heads to the Washington coast, where his technological innovations catapult him to fame and fortune, before plunging him into shame and accusations that he has, quite literally, destroyed people’s lives. High Country News recently spoke with Vara about drawing on his family history and experience as a journalist to create fiction, the implications of caste for his characters, and the importance of landscape in his writing.

This conversation has been edited for length and clarity.

News from the High Country: Can you tell me about the inspiration for this story? Do you remember where you were when the idea was born?

Vauhini Vara: I do, in fact. It was the winter of 2009. I was traveling with my dad and his wife in South America when I was in college. I remember we were on a train, and my dad was teasing me, “Why do you keep writing short stories? You should be working on a novel.

I thought, just as teasingly, “OK, Dad, why don’t you give me a novel idea then?” He was like, “Well, you could write my family’s story about the coconut grove in India.”

He was brought up there at a time when caste relations in the country were changing. And at that time, my father’s family became owners of this coconut grove where they were previously workers. It changed all those dynamics within his family in interesting and ultimately difficult ways. This was the starting point of the novel. At the same time, because I had worked as a technical journalist for the the wall street journalI had all these ideas floating around in my head about Silicon Valley and the rise of Big Tech.

So the story of my father’s family farm and the story of the rise of Big Tech became the same novel through King Rao, this character who was born in this coconut grove in the 1950s.

HCN: In the book, we see a coast of Washington that is plunged into a growing climate catastrophe – drought, wildfires, floods – while a group of aberrant individuals, the Exes, attempt to chart a different course. , which is essentially a return to life off the land. Why did you choose this region of the country to illustrate the threats and joys of man’s evolving relationship with nature?

VV: My family moved to the Seattle area when I started eighth grade. Yet when I think of an ideal landscape, that’s what it is for me – mountains and water and greenery and beautiful vegetation. But now coastal locations like Seattle or India’s Godavari Delta, where part of the novel also takes place, are experiencing some of the most devastating impacts of climate change. So, I thought the coasts could show how people could have a close sense of communion with the land, but is also a place where the threat of climate change was very present.

HCN: I found it remarkable to read this book at a time when there is so much talk of the importation of castes from India to America. Do you see this book as part of that conversation?

VV: Growing up, I wasn’t particularly aware of my own caste identity. But to write about the coconut grove and the relationship of the family to the land, I almost had to write about caste and class. And then I imagined King Rao becoming the CEO of technology in the United States. From an American Indian to becoming a tech CEO was a little difficult when I started writing 10 years ago. I imagined that I was writing this alternate history.

Now, an Indian-American CEO of a very powerful tech company doesn’t seem unusual. But the part that represents a future we haven’t reached yet is a Dalit becoming a tech CEO. King Rao is one of many Dalit characters in the book. He is aware of how caste has reduced his opportunities, but he does not have a broad sense of caste oppression like some of the other Dalit characters do. So, it is no coincidence that the character who becomes the head of a powerful world government that creates all kinds of social stratification is that character who is not engaged in issues of caste and caste oppression.

HCN: What about the Ex and the alternative they offer to this techno-capitalist establishment? What were some of your inspirations in building their ideology, the individual characters, their community?

VV: Anarchism is not a philosophy I consider myself well versed in, but I read a lot to understand it for the purposes of the novel. I read Emma Goldman’s autobiography. I also read Taoist philosophy. I tried that the Ex not be too didactic. I wanted their way of being to be informed both by these ancient texts and by more modern anarchist thoughts. At the same time, I didn’t want it to be portrayed as a perfect alternative. I think in our current post-capitalist society, a fringe group like the Ex would only exist as long as the most powerful forces tolerated them.

HCN: I was wondering if the Ex were also inspired by events like the WTO protests that took place in Seattle while you were living there.

VV: Yes definitely. I remember seeing pictures in the news of these protests just across the bridge from where I grew up and being captivated by them – by ordinary people taking a stand on something. thing. I found it very exciting and moving. It was also such a different time, pre-social media and, of course, cell phones. And the exes in the novel, they reject technology. These protests have informed my understanding of what a protest movement without technology might look like.

I remember seeing pictures in the news of these protests just across the bridge from where I grew up and being captivated by them – by ordinary people taking a stand on something. thing.

HCN: You grew up in Seattle, then you lived in the Bay Area. Now you live in Colorado. How have these parameters shaped your writing process?

VV: In the early drafts of the book, a lot of things were happening on a fairly abstract level. So, Athena (Rao’s daughter) and her father lived somewhere offshore near the United States, but we weren’t sure where, and the exes also lived somewhere offshore. A friend of mine, Anna North, who is also a writer, read it and thought, “There must be an actual place on a map that we can visualize.

I remember looking at Google Maps and wondering, “Where is the coastal place where these people might live? And then zooming closer and closer to Seattle and realizing, “Oh, okay. They could live here. I ended up focusing on Blake Island. You can take a boat and hike around the island, but people don’t live there. There are no services. So I decided to make Athena and her father live on this island. It opened up a lot for the book. I finally went to visit the island, surveyed the forest. This landscape was ultimately important to the book on a very visceral level.

I finished the book in Colorado. My connection to the natural world has been stronger here than anywhere else I’ve lived. I also did a lot of editing two summers ago, when there were the very big forest fires. You would walk outside and there would be smoke in your eyes and in your throat. So I went back to some sections that specifically dealt with climate change, which I would describe as a pervasive backdrop to the book. I wrote these sections that summer because it felt very present and urgent.

HCN: I remember a line from the book about how the sunsets were too beautiful. And I was like, “Oh, yeah, that’s exactly it. It’s beautiful in that almost obscene way.

VV: I remember writing this during that strange summer, when you looked up at the sky and it was beautiful, but mistakenly beautiful. This coincided with a deeper sense of set-up in the book. Living in this place where I was more aware of my own life’s setting also helped me understand the importance of it to the book.

Raksha Vasudevan is a Denver-based economist and writer. His work has appeared in LitHub, The Los Angeles Book Review, NYLON and more. We welcome letters from readers. E-mail High Country News to [email protected] or submit a letter to the editor. See our letters to editor policy. Follow @RakshaVasudevan

Commercialization of Eid al-Fitr is a welcome thing: NPR